We are in a bull market for commodities and steel prices around the world are nearing all-time highs. US steel stocks outperform the markets in 2021 and are among the biggest winners in 2021. With steel price momentum and steel stocks looking strong, here are the five stocks that look like buys in June 2021?

With a gain of over 91% year-to-date, Nucor is the second best performing component of the S&P 500. It is the largest US-based steel company and is investing more to increase capacity. The business is highly exposed to rebar used in non-residential construction.

If President Biden’s infrastructure plans see the light of day, Nucor could be among the biggest benefactors. Not only does it have good exposure to steel products used in the infrastructure sector, but it will also have the spare capacity to supply them once it increases its capacity.

Looking at the techniques, Nucor’s stock is trading above its 50 day SMA (simple moving average) and its 200 day SMA which is a bullish indicator. The 14 day RSI of 47.8 is also a neutral indicator and shows that the stock is not overbought or oversold.

Nucor is trading at an NTM PE multiple (over the next 12 months) of 6.5x, which is higher than its peers. However, the stock has historically traded at a premium, and for good reason. The company has higher margins than its peers and also has a prime credit rating. Its dividend yield is also attractive at 1.59%. Nucor is posting record profits amid the sharp rise in steel prices and the upward trend in profits is expected to continue in the near term. 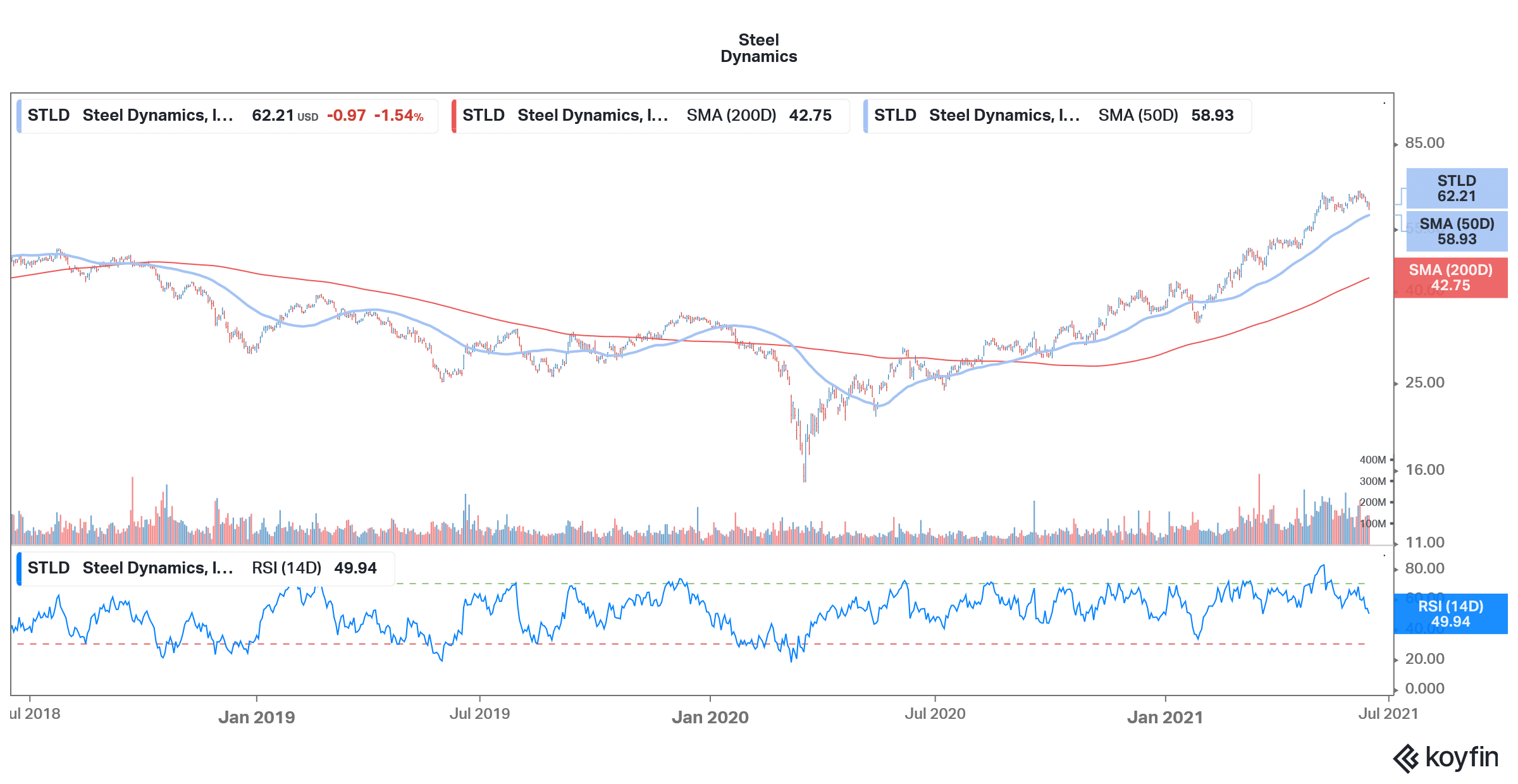 Like Nucor, Steel Dynamics also produces steel in EAFs (electric arc furnaces). These have a lower fixed cost structure and it is relatively easier to adjust production than traditional blast furnaces. Like Nucor, it is also investing in new factories that will increase its revenues and profitability in the years to come.

STLD is trading above its 50-day SMA (simple moving average) and its 200-day SMA. The stock has fallen from highs and is approaching the 50-day SMA of $ 58.83, which could provide a solid support area for the stock. Its RSI is also neutral at 49.9x.

STLD is trading at an NTM PE multiple of 5.6x. It has a dividend yield of 1.67%, which is higher than the dividend yield of the S&P 500. Earlier this week, the company released its earnings guidance for the second quarter. He said: â€œThe profitability of the company’s steel operations in the second quarter of 2021 is expected to be significantly higher than the first quarter results, setting a new quarterly record, driven by strong underlying steel demand and a significant expansion in the market. spread of metals across the entire platform, but no longer flat roller steel operations. 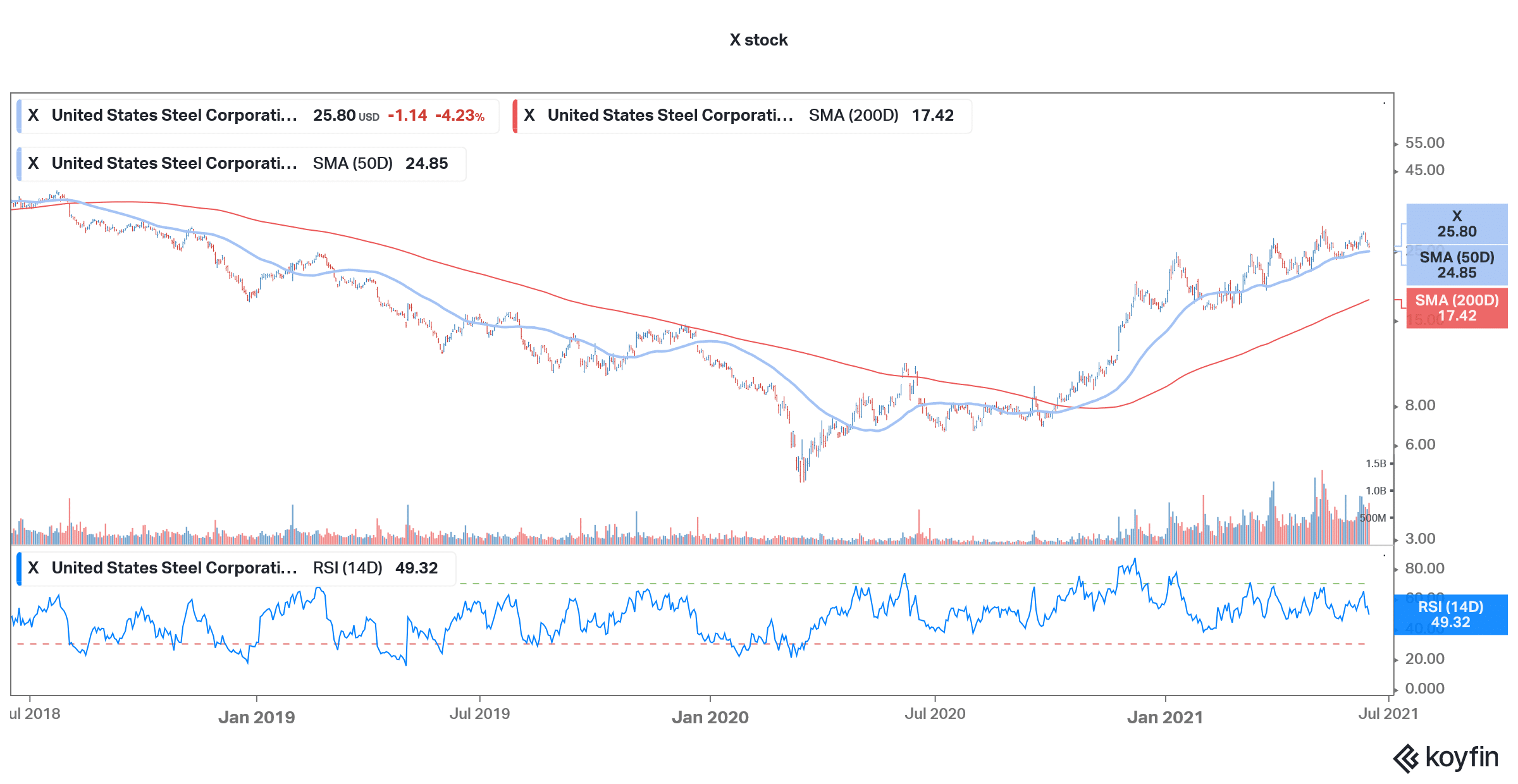 US Steel Corporation was once the largest steel company not only in the United States but in the world. The company has steel and iron ore activities. In steel, it has flat-rolled and tubular operations in the United States. It is also present in Central Europe.

While X is but a pale shadow of its glorious past, the company has taken several steps to transform the business. It is investing in the modernization of its aging factories and is also turning to EAF. X acquired Big River Steel which added EAFs to its business.

Additionally, the company is focusing on sustainable business practices and, earlier this year, halted construction on its Monday. Moulin Valley because it had a higher carbon footprint. X has a diverse product portfolio and its tubular segment is expected to benefit from the upward trend in energy prices as the segment supplies steel products to the energy industry.

From a technical standpoint, the X-share has moved back down from its 52-week highs and is approaching the 50-day simple moving average (SMA), which has provided a solid support area for the stock. Its 14-day RSI is also neutral at 49.3.

X is trading at an NTM PE multiple of just 2.6x, which looks quite undervalued. The company could see an expansion of valuation multiple. Its profits could also be boosted by high steel prices. Finally, its asset revitalization plan would soon be completed and the company will realize significant structural cost savings after the program. 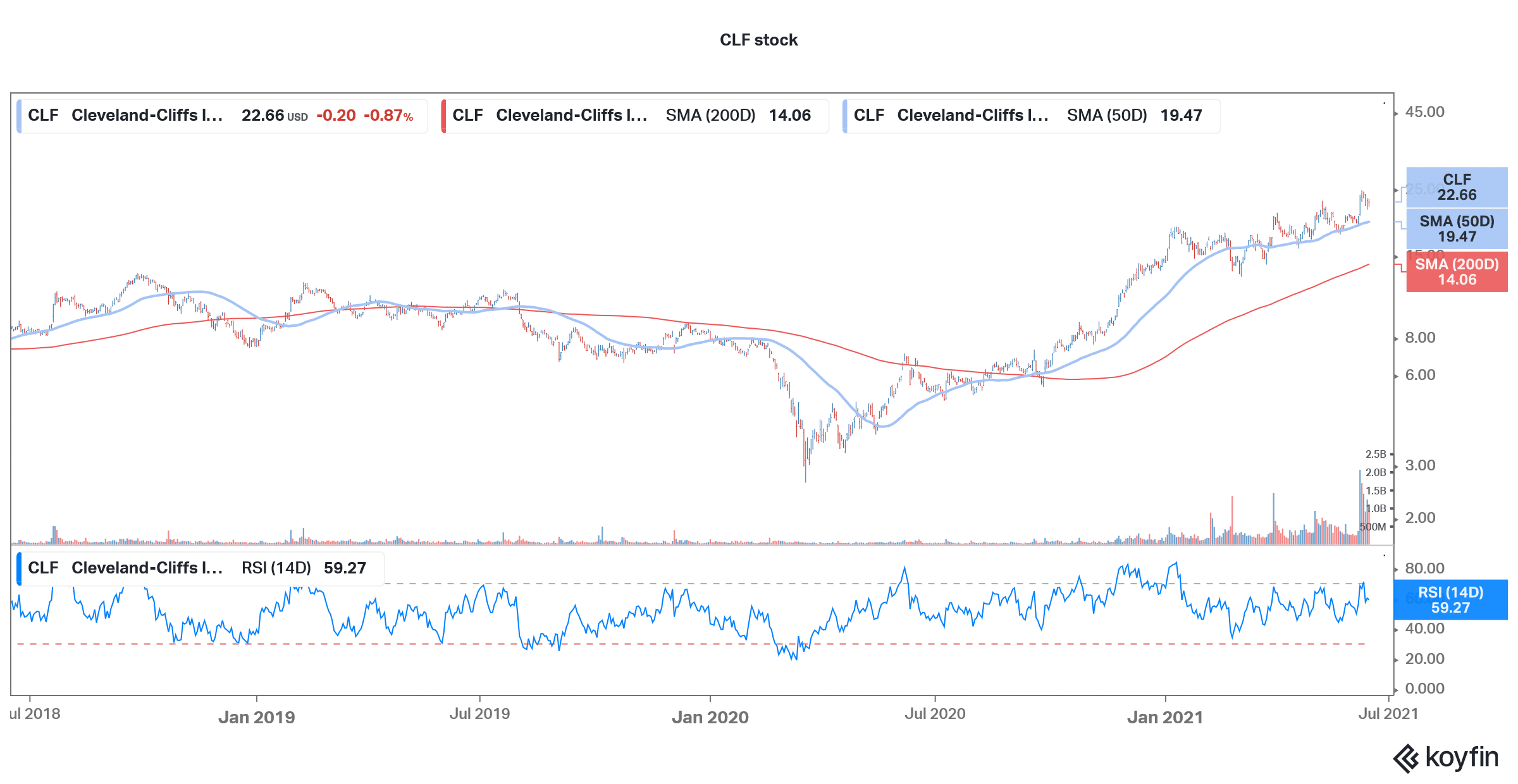 Recently, Cleveland-Cliffs grabbed the headlines after being one of the top talking points on the Reddit group WallStreetBets. The stock shot up after traders on Reddit targeted it in a short squeeze, but has since fallen from highs.

CLF was an iron ore miner but opted for vertical integration by acquiring AK Steel in 2019. Last year it also acquired the US operations of ArcelorMittal. Earlier this week, it raised its profit forecast and said it expected to post adjusted EBITDA of $ 5 billion in 2021 and $ 1.3 billion in the second quarter.

The CLF stock is trading above the 50-day SMA and the 200-day SMA, which is a bullish indicator. However, with a 14 day RSI of 59.3, it is approaching overbought levels. Fundamentally, the CLF share is trading at an NTM PE multiple of only 3.6x. The stock looks pretty attractive at these prices.

With strong exposure to automotive grade steel, CLF could be the biggest beneficiary of increased demand from automakers. 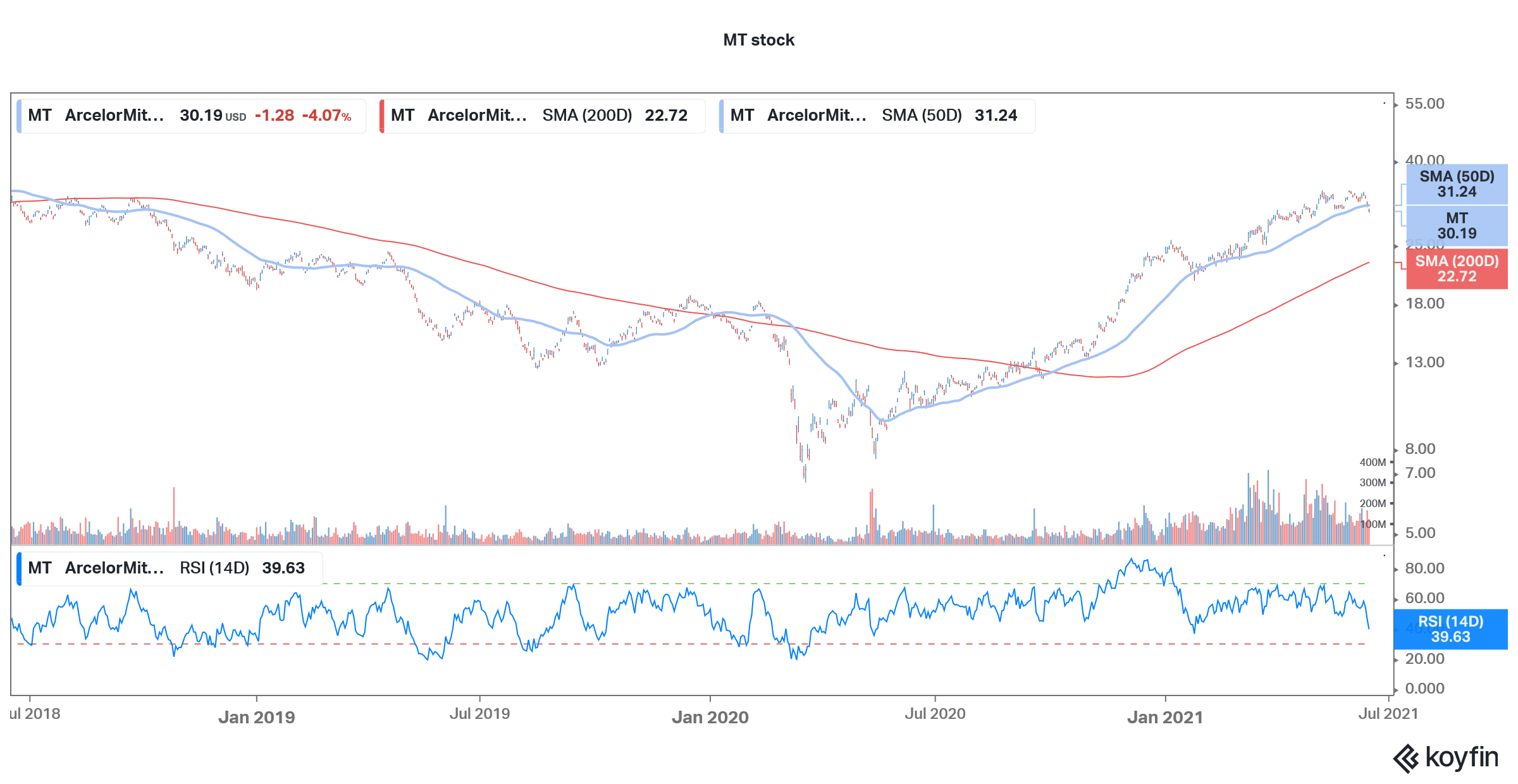 ArcelorMittal is the world’s largest steel company. It is an integrated steel company that exploits steel, coal and iron ore. The company has a long history of acquiring and turning around struggling steel companies around the world. The company generates most of its revenues in Europe and has further strengthened its presence on the continent by acquiring Ilva, which allows MT to gain a foothold in the Italian steel markets. It also acquired Essar Steel in India, which strengthens its presence in India’s steel markets, which are among the most dynamic in the world.

On the technical side, MT is approaching the oversold zone with a 14 day RSI of 39. The stock is trading above the 50 day SMA and the 200 day SMA which is a bullish indicator. The MT share is trading at an NTM PE multiple of 6.4x. In the medium term, the recovery of Ilva and Essar Steel will bring added value to MT investors.